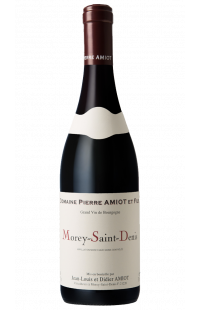 Morey-Saint-Denis 2019 from Domaine Pierre Amiot is one of the signature... 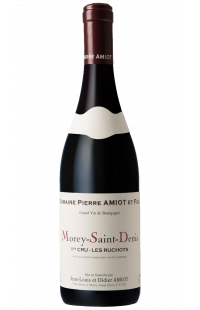 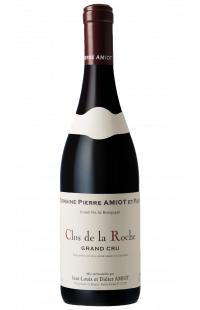 Domaine Pierre Amiot is located in Morey-Saint-Denis For 5 generations.

After Pierre, Léon, Édouard; Pierre Amiot took over the family estate in 1951. He joined forces with his eldest son, Jean-Louis, in 1980. Didier, the youngest, arrived on the farm in 1991. Today, Jean-Louis and Didier operate nearly 8 hectares in Morey-Saint-Denis and Gevrey-Chambertin.

The Estate has developed around the family house in the center of the village. The vineyard is made up of 40 plots located 85% in Morey-Saint-Denis, the remaining 15% in Gevrey-Chambertin. They offer a complete range with wines at each level of appellation: 2 Regional, 3 villages, 5 Premiers Crus including their Vosnes Romanée and 2 Grands Crus, Clos de la Roche and their Charmes Chambertin.

The agriculture is reasoned there, The harvest is harvested manually in openwork boxes and then sorted on a vibrating table: 70 to 100% destemming depending on the year, gentle and slow extraction by cold maceration for 5 to 7 days, reasoned alternation of punching down and pumping over, fermentation in indigenous yeasts for about 10 days with temperature monitoring and control.

Aging in French oak barrels (228 l), for 15 to 18 months: 30% new barrels for the Premiers Crus and 50% for the Grands Crus racking and bottling according to lunar cycles, optimal clarity.

The Domaine's wines are typical of the Côte de Nuits: ruby to intense garnet color, nose of small black and red fruits, on the palate, balanced and structured wines with silky tannins. The wines are faithful to their origin. They offer the right balance between strength and finesse. They are especially appreciated for their elegance and generosity. Discover and order the wines of the Pierre Amiot estate online, a sublime Cru de la Côte de Nuit available on 12bouteilles.com