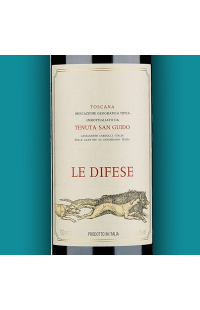 Back to top 
Tenuta San Guido is located on the Tyrrhenian coast, between Livorno and Grosseto, in the Maremma. The estate stretches 13 km from the sea to the hills. In the 1920s, the aristocrat and racing horse breeder Mario Incisa della Rocchetta, passionate about Bordeaux wines, dreamed of creating a “thoroughbred“ wine. He then decided to plant Cabernet vines, near the small hamlet of Bolgheri, with the hope of obtaining a wine similar to the wines of the left bank. The flagship varieties of Tuscany are Sangiovese and Nebbiolo but Mario Incisa della Rocchetta assumes this upheaval of tradition. The innovative decision to plant this variety at Tenuta San Guido was partly due to the similarity that Mario Incisa noted between the Tuscan terrain and that of Graves in Bordeaux. Mario Incisa della Rocchetta begins production of his first Sassicaia wine, like a Bordeaux wine. However, the first vintages are not well received. Critics accustomed to local wines do not encourage the aristocrat who had not taken into account the fact that wines made from Cabernet Sauvignon are more complex and need more time to mature and develop. So from 1948 to 1967, Sassicaia remains a private wine, consumed only at Tenuta San Guido. Each year, Mario Incisa della Rocchetta stores bottles in the Castiglioncello di Bolgheri wine cellar and quickly realizes that after aging, the wine is much better. He worked on his improvement and it was not until 1968 that Sassicaia was marketed for the first time. The welcome is surprising, Sassicaia is considered a Premier Cru of Bordeaux. Today, the reputation of Sassicaia is well established, this Super-Tuscan is known to be one of the best Italian wines. In the following years, the winery was moved to a temperature controlled cellar, steel fermentation tanks replaced wooden tanks and French barrels were introduced into the aging process. For about 40 years, Tenuta San Guido has been owned by Nicolo Incisa della Rocchetta, a pioneer of modern agriculture, famous for planting the cypress tree that inspired the poet Giosuè Carducci. In the 2000s, Nicolo Incisa created Guidalberto, the second castle wine made from a blend of Cabernet Sauvignon and Merlot. His wish is to use a new grape (Merlot) and to develop a wine that can be appreciated younger than the first wine of the estate, Sassicaia. In 2003, a newcomer entered the Tenuta San Guido range, Le Diffuse, a lighter and more affordable red wine than its predecessors.