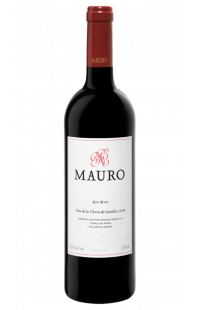 The Mauro, vintage 2019, is a Spanish blended wine from the high valley of the Ribera del Duero, located in the heart of Castilla y Leon. It is composed of 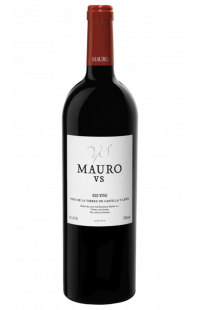 The Vendimia Seleccionada de Mauro (VS) is the first of the great wines of Bodega Mauro. The 2018 vintage was aged for 26 months in oak barrels and kept for 6 months before being released on...

The first winery belonging to the Mariano Garcia family in Castilla y Leon, Bodegas Mauro is in homage to Mariano's father. Founded in 1980, two years before AO Ribera del Duero, Bodegas Mauro was excluded from the appellation of origin due to the strict consideration of the geographically defined territories at the time of their constitution, when the historical arguments advanced by the vineyards Rudela de Duero were insufficient. Vineyards dating from the time of the Habsburg dynasty (Philip II, 1562). But on the other hand, Mauro always adheres to strict quality standards and breaks the strict framework of A.O. to know how to use it by developing wines with high potential. The wine cellar has 35 hectares of vineyards, distributed between the towns of Tudela de Duero and Santibáñez de Valcorba. Tudela is located on the banks of the Douro in the tertiary and quaternary eras, at an altitude of 760 meters. Affected by the extreme continental climate, winter is very cold and summer is very hot and dry, with a rainfall of 450 mm / year. Located in the flat soil of the Upper Miocene, it is composed of 30 meters of mud and dust and alluvial layers of silt, mud and clay are deposited on the pebbles. Winters are long and very cold, minimum temperatures in November and December are below 0 ° C, summers are short and mild, with thermal oscillations between 15 and 18 ° C, giving the grapes an aromatic force. 85% tempranillo, 10% grenache and 5% syrah are planted in the vines, with an average age of 22 years. Depending on the vineyard, the planting density varies from 2,500 to 3,500 grapes / ha, and the yield varies from 3,000 to 5,000 kg / ha. The yield of the strains is strictly controlled and the grapes are rigorously selected. The harvest is carried out at 20 kg. The winery is located in Tudela de Duero, a former 17th century mansion that produced wine. The cellar is now modernized with the most advanced technology. Its total capacity is 215,000 liters. The stainless steel tank has a capacity of 12,000 liters. Pick the grapes at the entrance of the cellar and finish the work by gravity to avoid pumping operations. Each vineyard, each grape and dandruff impregnation fermentation process is independent, depending on the harvest, from four days to three weeks. By renovating 20% ​​of the park each year, the wine is aged in 1100 French oak barrels from Allier and Nevers and American barrels in different barrels.