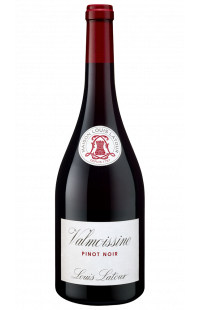 This 2018 Domaine de Valmoissine Pinot Noir exhibits a beautiful ruby color with garnet highlights. A complex nose with aromas of raspberry and blackberry accompanied by notes of venison. Its mouth is round with...

The Pays des Coteaux du Verdon appellation is a French wine from the IGP Var which takes its name from the Verdon river which crosses the Alpes-de-Haute-Provence, the Bouches-du-Rhône and the Var. Verdon lies at the foot of the Northern Alps and extend for 50 kilometers.

The varieties most often used by the appellation Pays des Coteaux du Verdon are Carignan, Syrah, Cinsault, Mourvèdre and Grenache. The vineyards of the Verdon enjoy a warm and temperate Mediterranean climate conducive to the production of a fruity wine, harmonious, fresh and well structured.

The Coteaux de Verdon belong to the vineyards of the Var, the oldest vineyard in France. In 600 years BC, the first vines were produced by the Phoenicians, it was then the Romans who contributed to the blossoming of the vineyard. Today, there are three Appellations of Controlled Origin (AOC) coexist in the Var: Bandol, Côtes de Provence and Coteaux du Verdon.

To obtain the mention “Coteaux du Verdon“, the wine must come from the vineyards of the following municipalities:

Among the wines of the Var, we selected the Valmoissine estate of the Louis Latour house, a Pinot Noir grape variety. The 2014 vintage has a ruby ​​color with garnet highlights and a nose of raspberry. In the mouth, it is a round and greedy wine with melted tannins and a perfect elegance.